On to making my bottom half!  Hooray!

I joined and started going to my local Handweavers, Dyers and Spinners group in the middle of the year.  To start with, I hung out at the weaving group on occasion to get a feel for what weaving is all about, and that slowly morphed into a less stalkerish kind of thing as I decided it was time to rent a loom and give it a go myself.

As you can imagine, the group is full of all kinds of textile officiandos, who are all very generous with their time! After seeking advice, I decide to go for a 2 colour twill.  This meant dyeing half of the singles hand spun wool I picked up from Bilby Yarns.

Those of you with a keen eye for colour would know from my previous post that I chose to dye the 600g with sour grass. This is what sour grass looks like – yep, its that weed that grows rampantly on any untended verge or vacant block during spring. I started picking them on the daily walks to school and back, keeping them in the freezer until I felt I had enough. 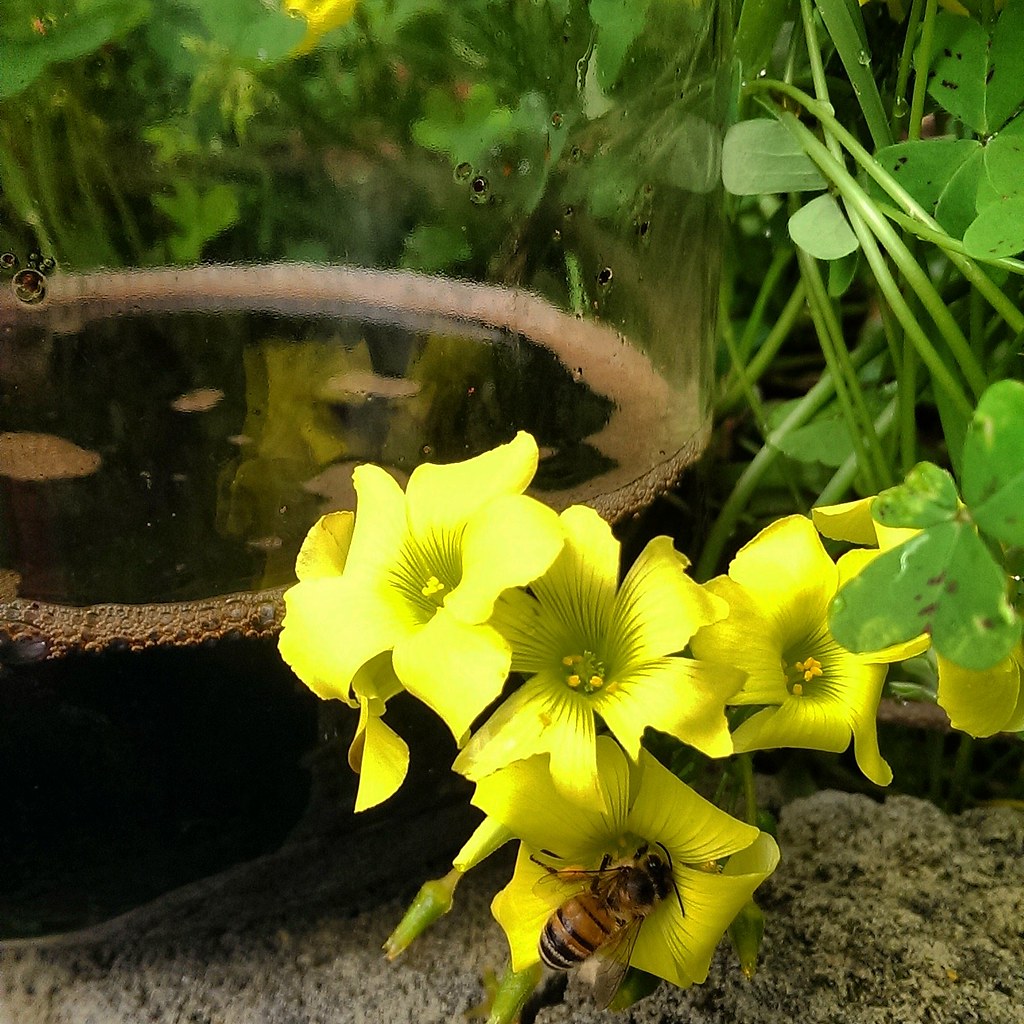 Once I had around 200g of flower heads I soaked them in hot water for 4 hours, and then decided it wasnt enough so went picking another 200g and added those to the pot.

Once soaked for two more hours, I strained off the flowers and split the dye into two pots.

Meanwhile I had prepared the wool by unwinding the balls (see hilarious video here of my improvised technique), bundle tying each one on 4 sides (remember my first tangled mess when I didn’t do this?) and then soaking in warm water and locally made olive oil soap for 2 hours.  I rinsed in warm water and then kept the wet skeins wet ready for the pots.

I put half the wool in each pot and simmered on a very low heat for half an hour, switching the skeins to the other pot and simmering a little longer and letting them steep over night.  In the morning I hung the now very yellow wool up to dry slowly (which took a couple of days as it was rainy).

I saved the dye and put some more wool and linen in the solar dye pot for a week or so until it was exhausted. All in all the 400g dyed 700g of fiber but could possibly have been stretched further.

A few hours of ball winding later (this time using children as a way to avoid tangles) and I had a lovely stack of white and yellow wool ready for weaving! 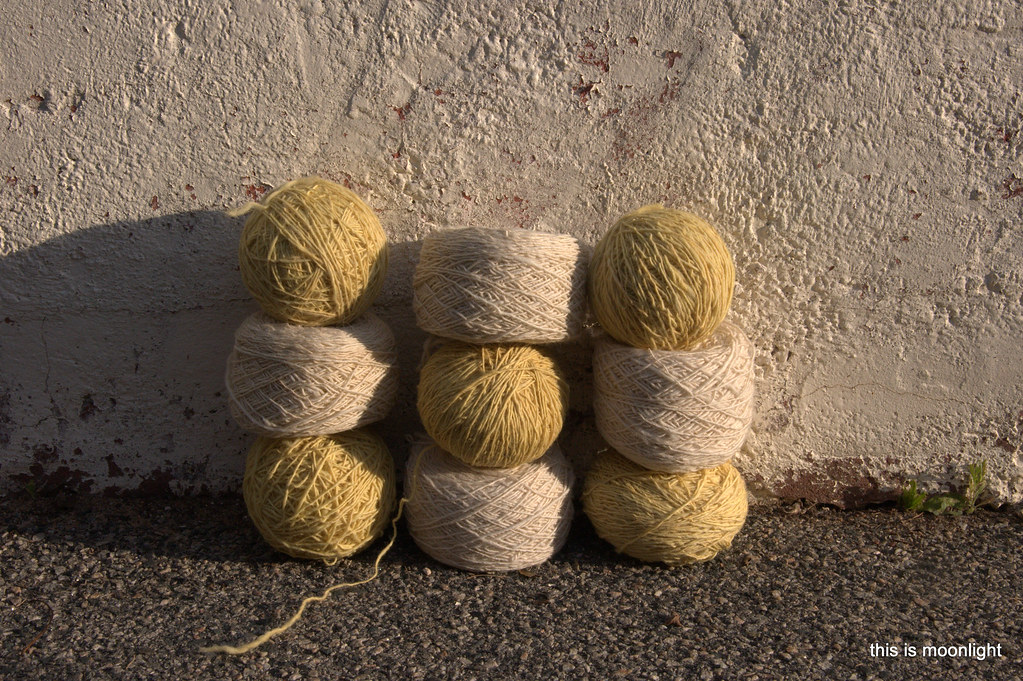 One of my other life skills then came in handy.  Maths, I can do maths.   All we knew was the weight of the wool and not the length so we used this nifty device and some maths to work out whether I had enough length and to decide on a length of a warp.  Here are the basic measurements of my weave – 65cm wide, just over 2m of warp, 12 warps per inch set up on a number 8 comb on a 4 shaft loom. Do I sound like I know what I am doing? Good, cause I haven’t got a clue!

Setting up the loom is probably the longest, most critical step in weaving.  I had a lot of help from Sue who runs the weaving group sessions in setting everything up and dealing with the tendency of the singles wool to stick and tangle at the slightest provocation.

I started by measuring out the warp on what is called a warping board. You cross the wool in such a way that makes it easier to thread the loom later.

The next step was to bundle the cut lengths and tie them to the front beam.  Each strand is then plucked out in turn and threaded through the comb.

The threading then continues through the heddles that are controlled by shafts that raise one row at a time.  You set your weave pattern partly by the order in which you thread the heddles.  I found this part a little eye bending, and taking it in small bunches was essential for sanity!

We then tied the warp to the back and then front frames, checking for any errors as we went.  The hardest part was winding all the wool to the back as the wool just loved tangling!

All in all it took around 2 whole days to set up, but now I am cautiously cautiously starting to weave my yellow weft wool.

Can you spot the pattern yet? 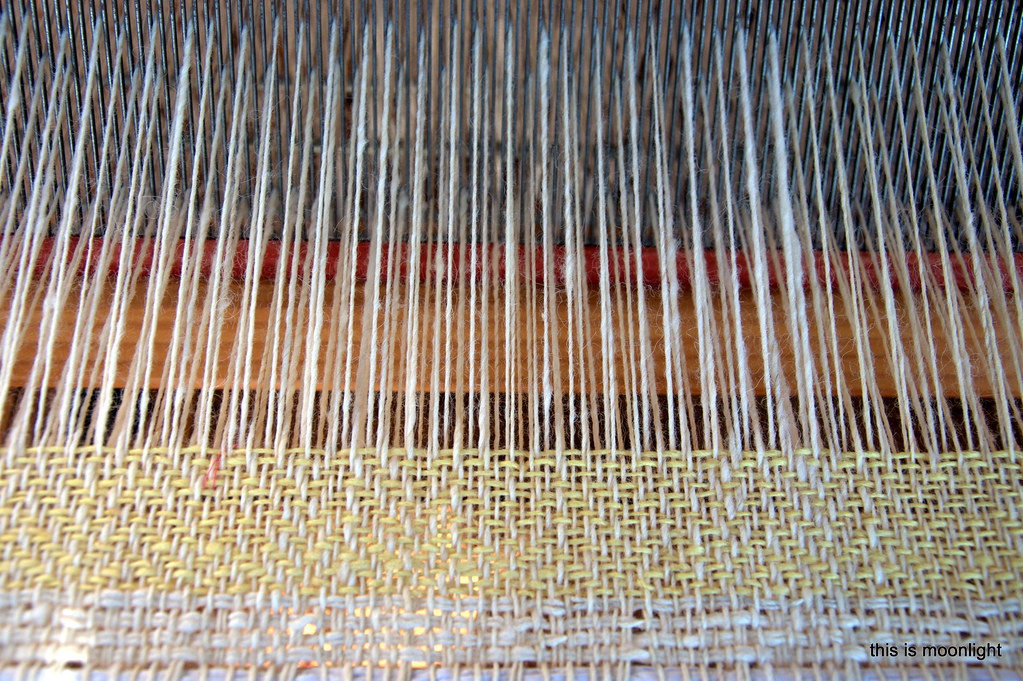 I’ll leave you with a snap shot of my outfit as it stood before going on the loom last week.  Hope you are enjoying watching things evolve! 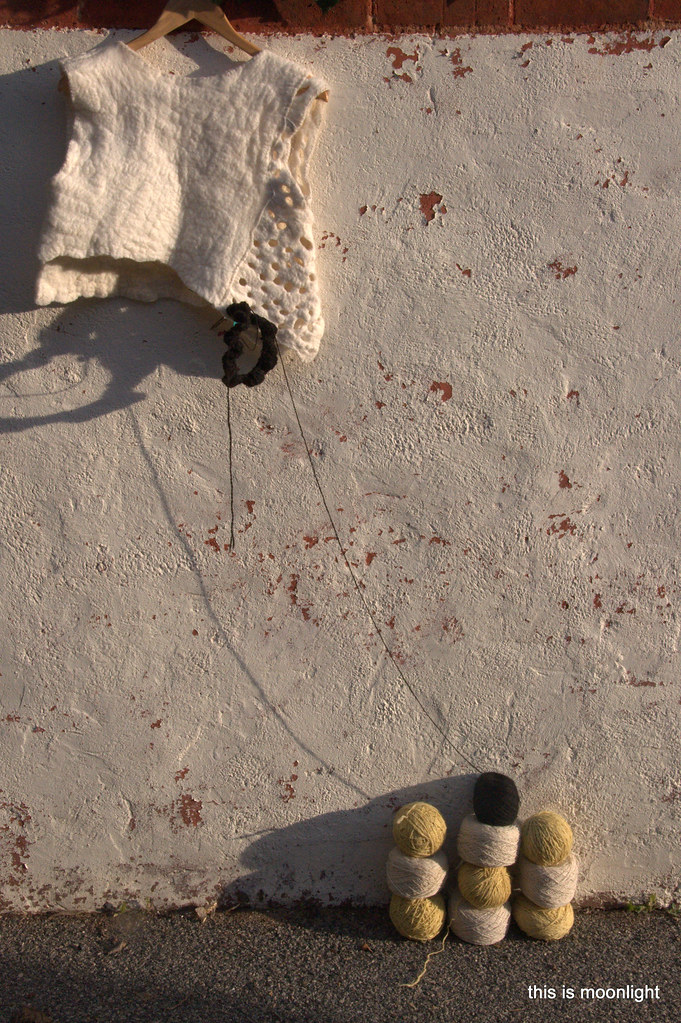