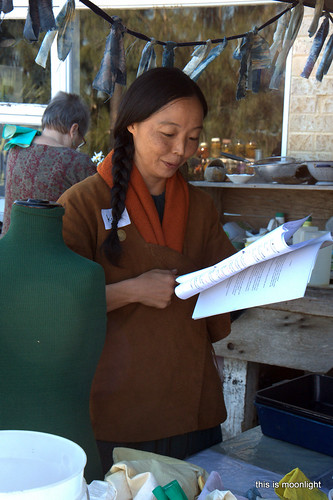 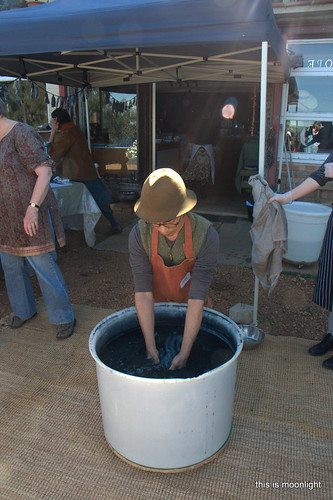 They are the custodians of the last ryukyu indigo farm in Okinawa, Japan using traditional fermentation techniques. From harvesting the indigo crop to hand sewing the finished garments, Kitta and Sawa show care at every stage of the whole process.  They have also reintroduced madder which is no longer farmed in Japan and are advocates for the revitalisation of natural dyeing as an industry. 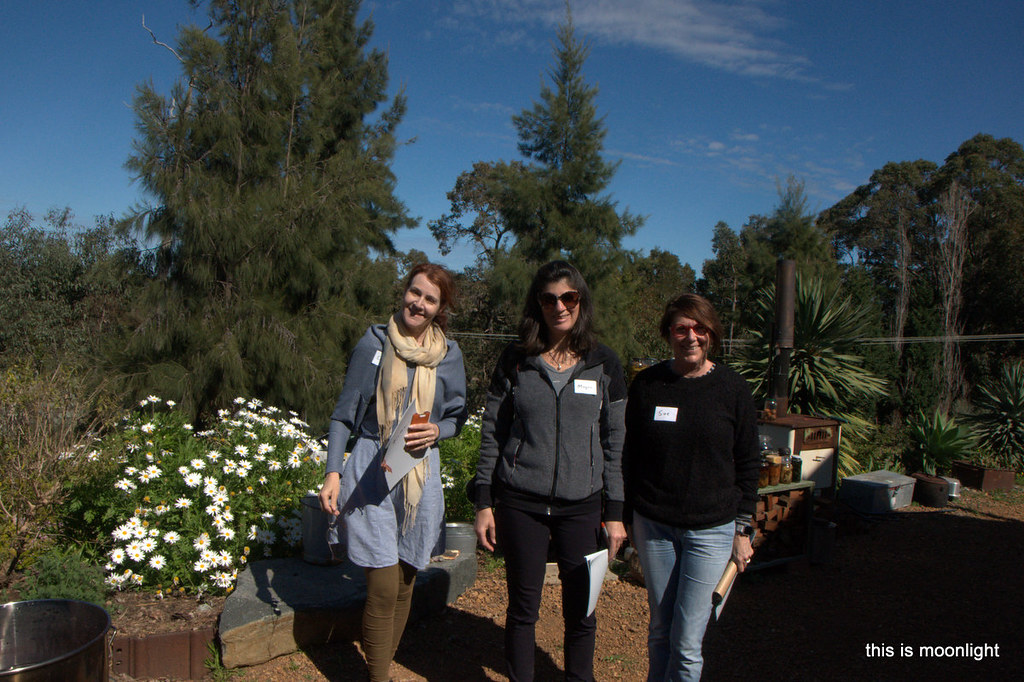 We were lucky enough to have them visit Perth and hold a special workshop for us on dyeing with their ryukyu indigo and madder.     The workshop was hosted at Trudi Pollard’s Studio, a local designer of eco couture. Check out Trudi’s collection of solar dye pots! 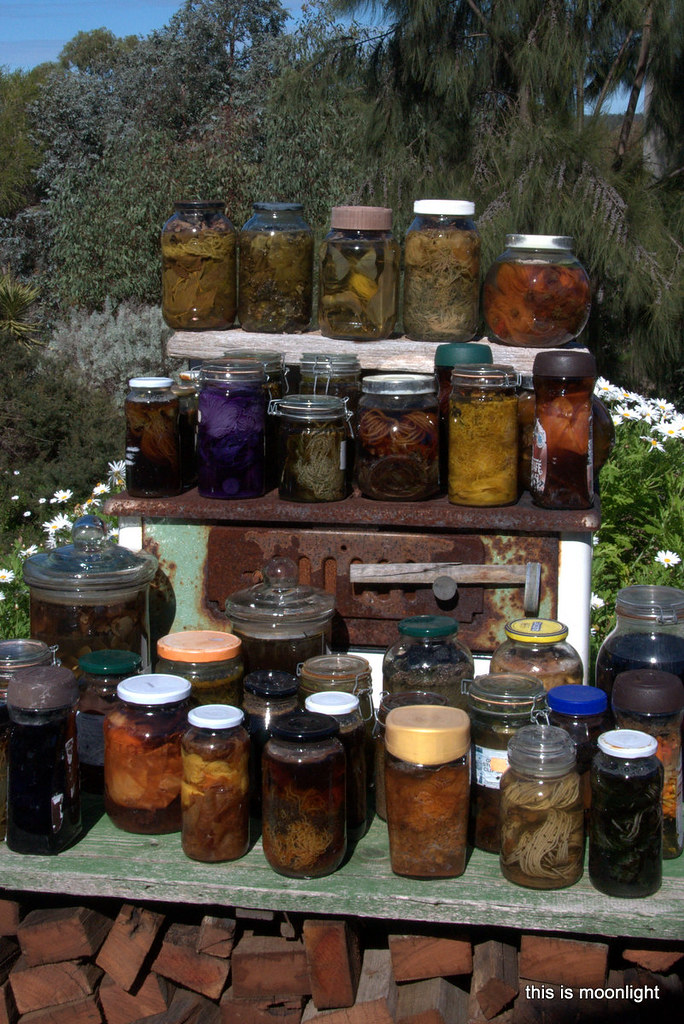 And just one example of her beautiful work: 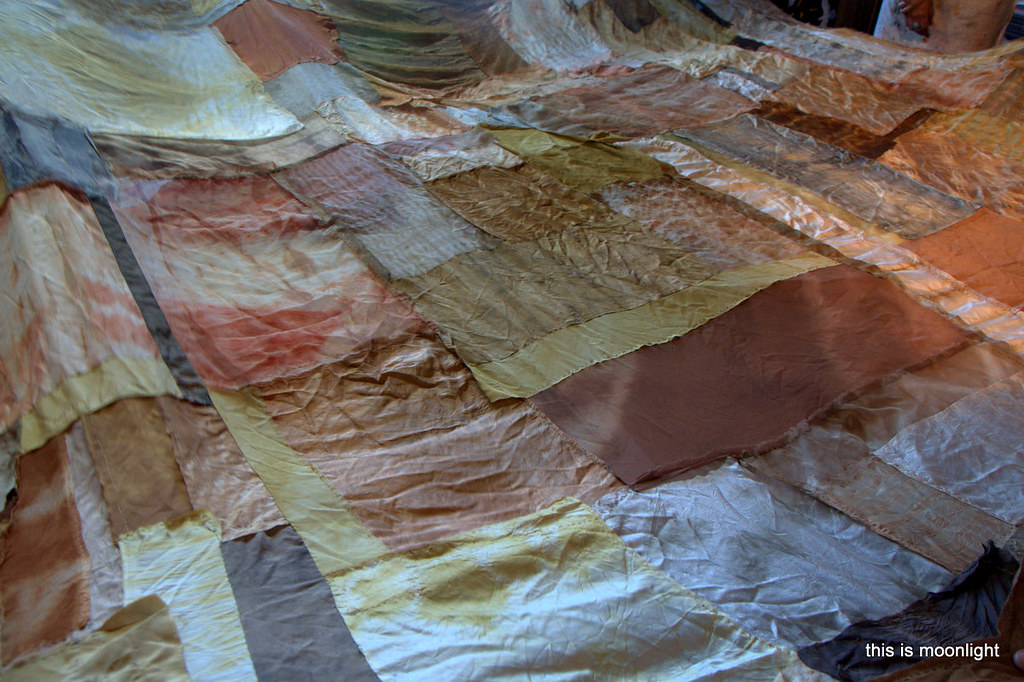 We dyed Japanese linen which had been prepared by soaking in soya liquid for the madder (a little like the dairy method I have been using) and wet for the indigo.  We also added some fair trade Cambodian silk to the madder which did not need mordanting. 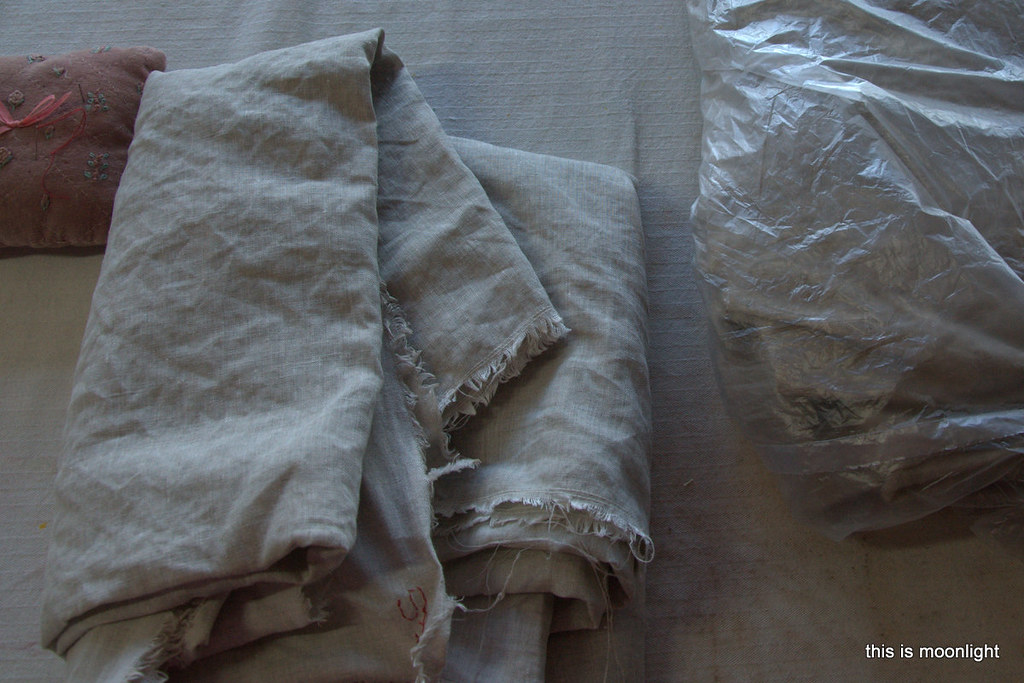 Madder roots have been used for dyeing red colours for centuries. The dried root looks like this: 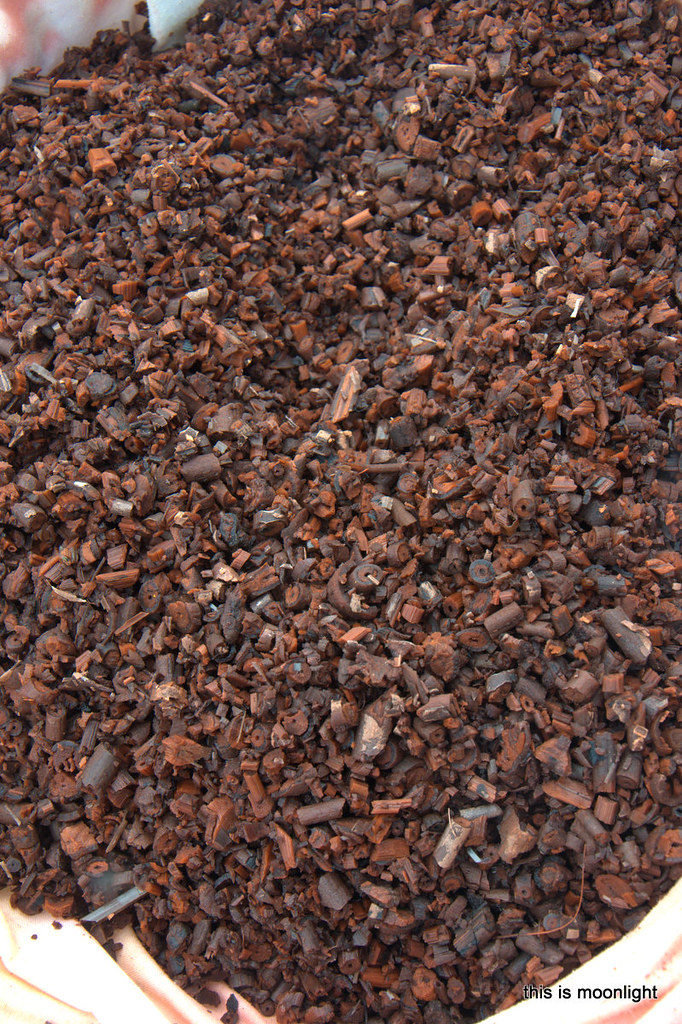 The madder was prepared for dyeing by heating for a couple of hours before adding vinegar, 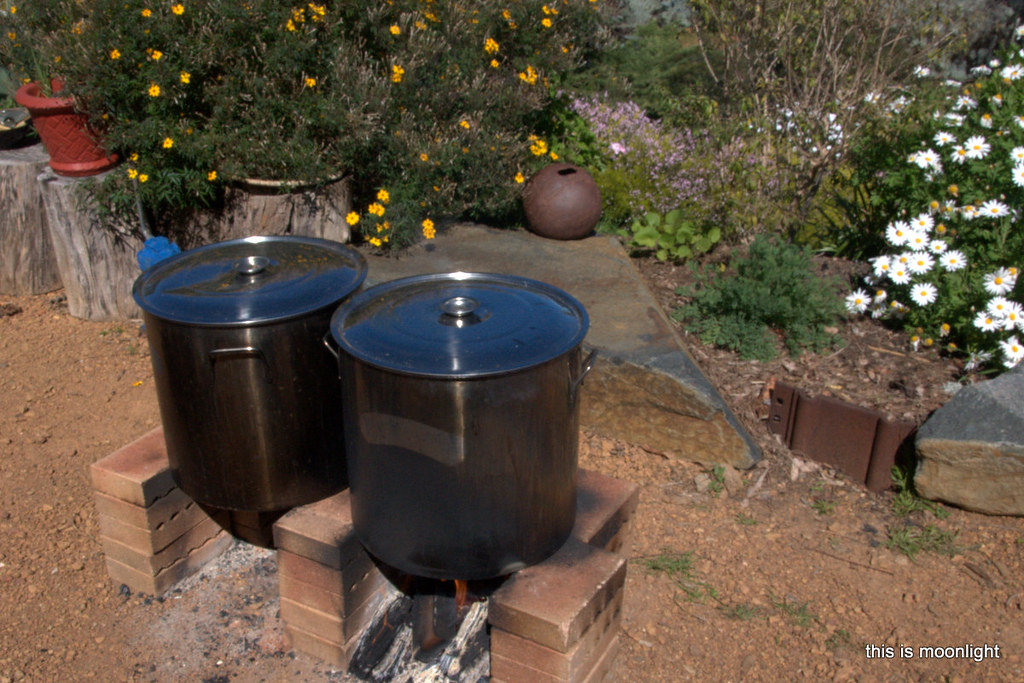 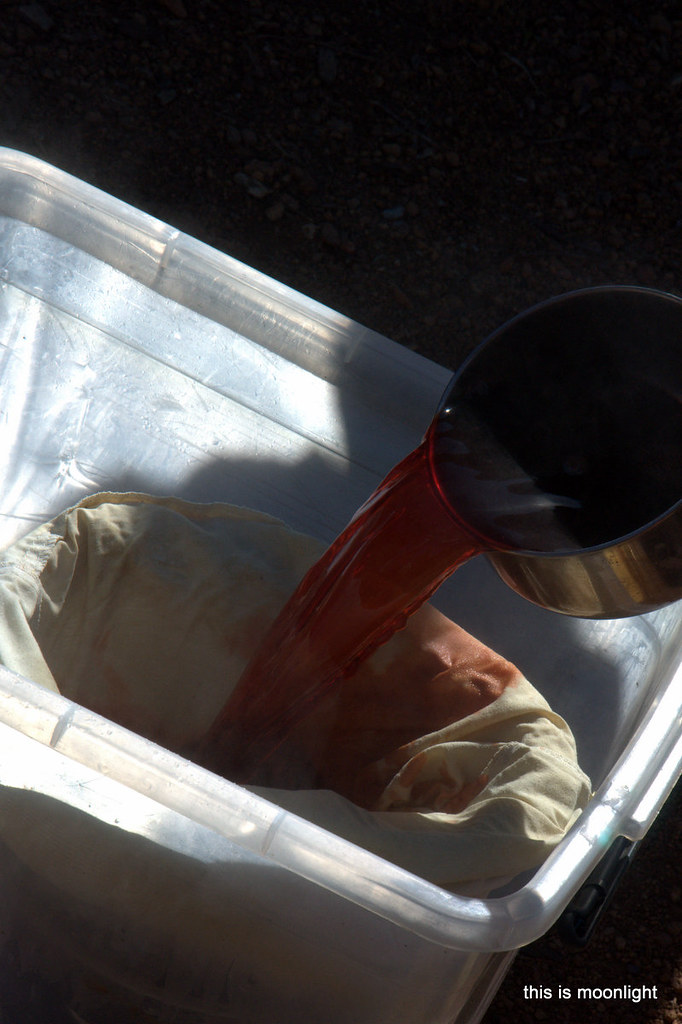 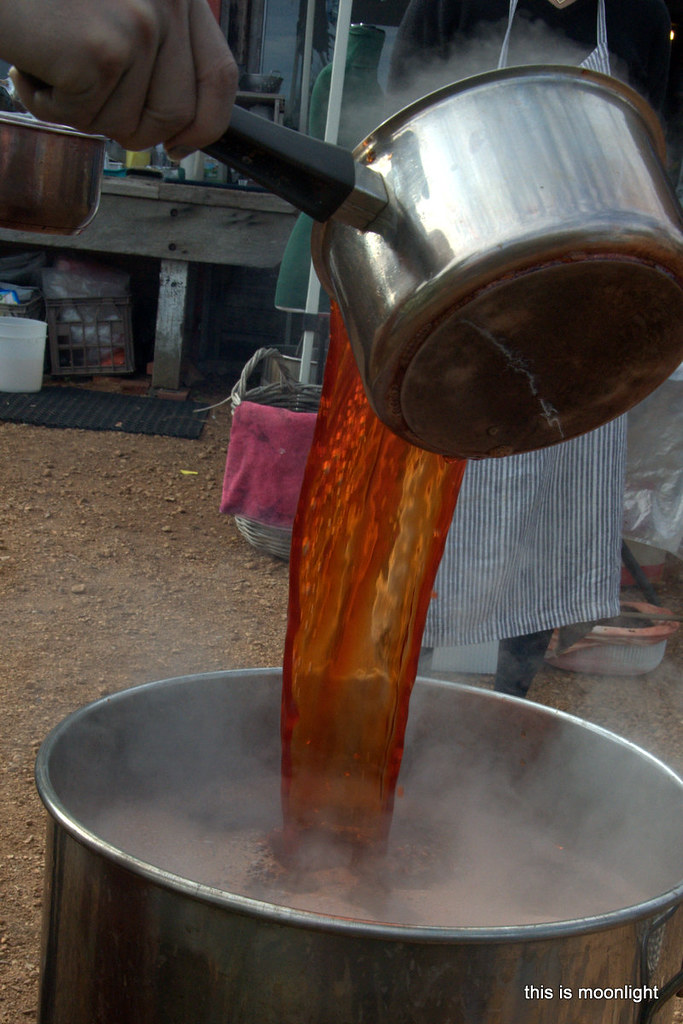 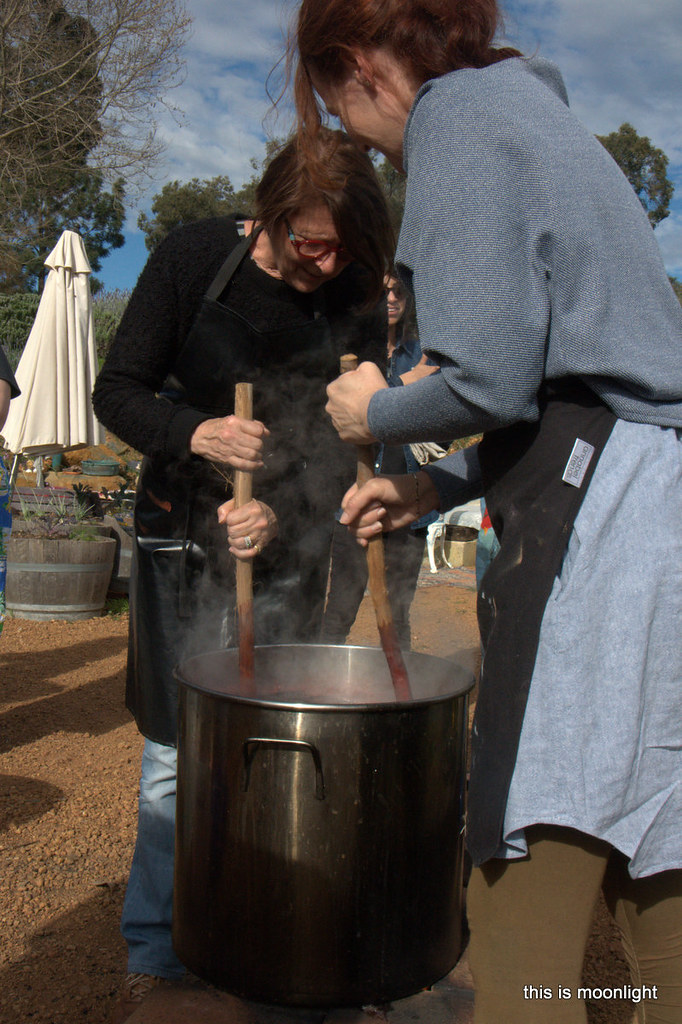 and mordanting it with alum in between dips. 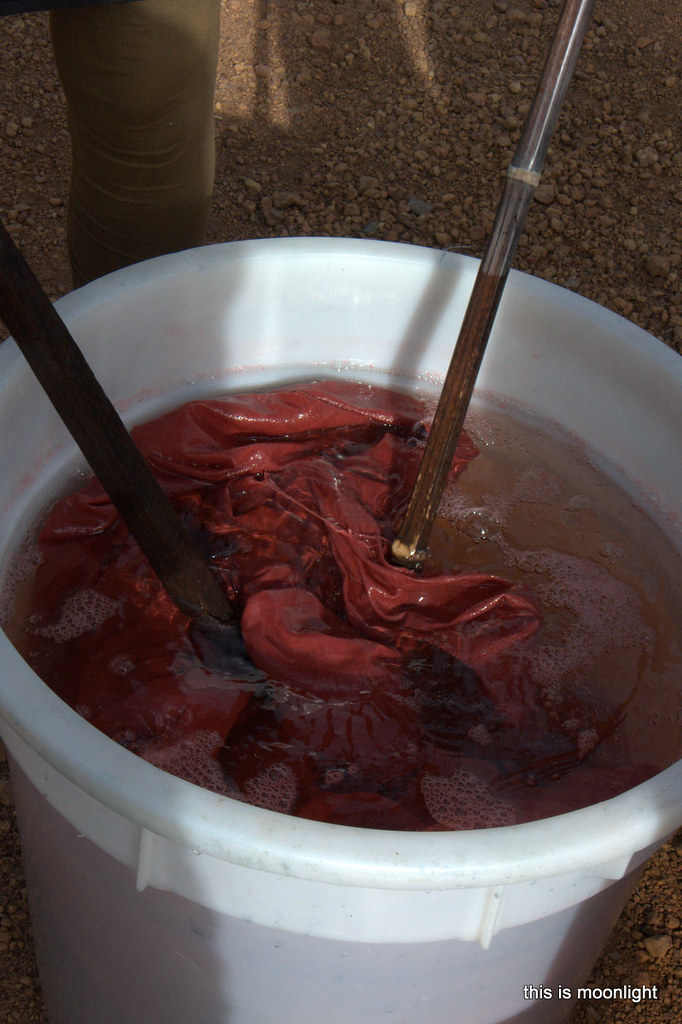 The fabrics all went the most deep tangerine colour. . 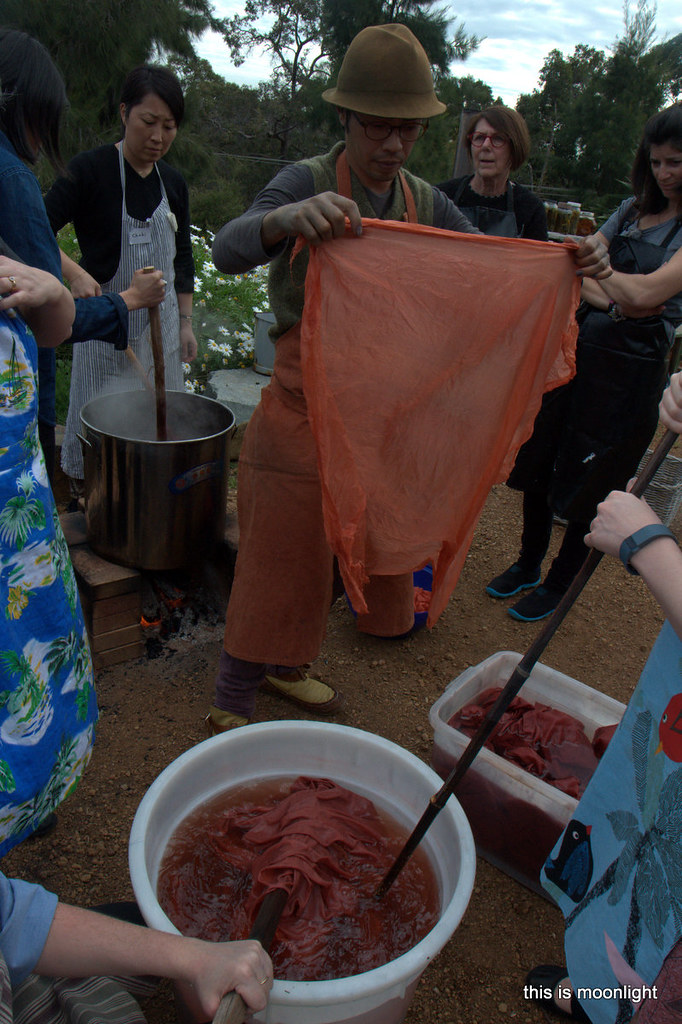 The indigo vat had been brewing for a week or so at the studio being carefully tended to (even wrapped in an electric blanket!).   Kitta and Sawa use local sake and malt as the base, and wood ash and lime to control the pH. The vat had a wonderful glow and shimmer when opened, and a distinctive smell that I can only describe as somewhere between rotting fruit and alcohol. 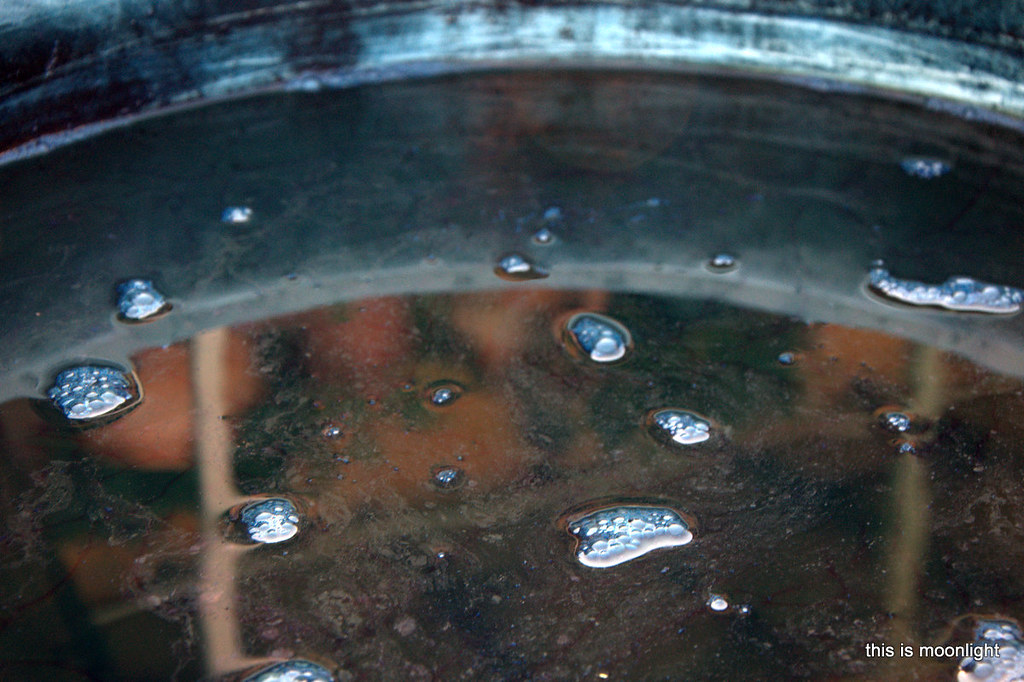 We massaged the linen under the water (those gloves didn’t last long and I later went for the blue hand look!) 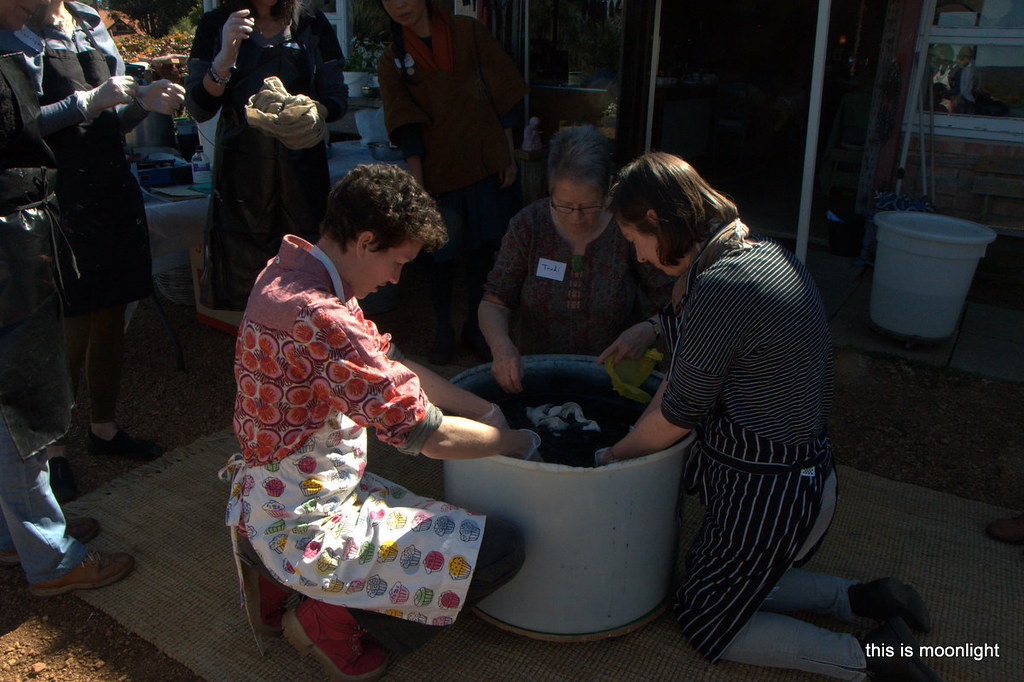 //embedr.flickr.com/assets/client-code.jsAnd then aired them, where the greenish colour in the vat turned to a true blue. 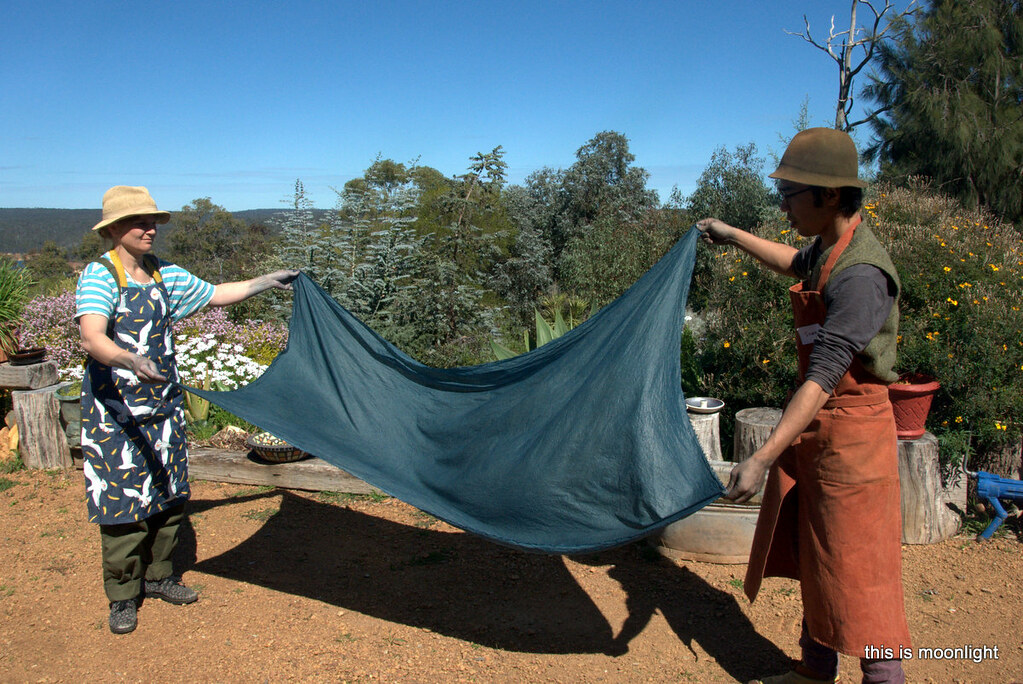 After a few dips, the indigo was clearly getting weaker so we reverse the order for fabrics going in the vat for a second dip. 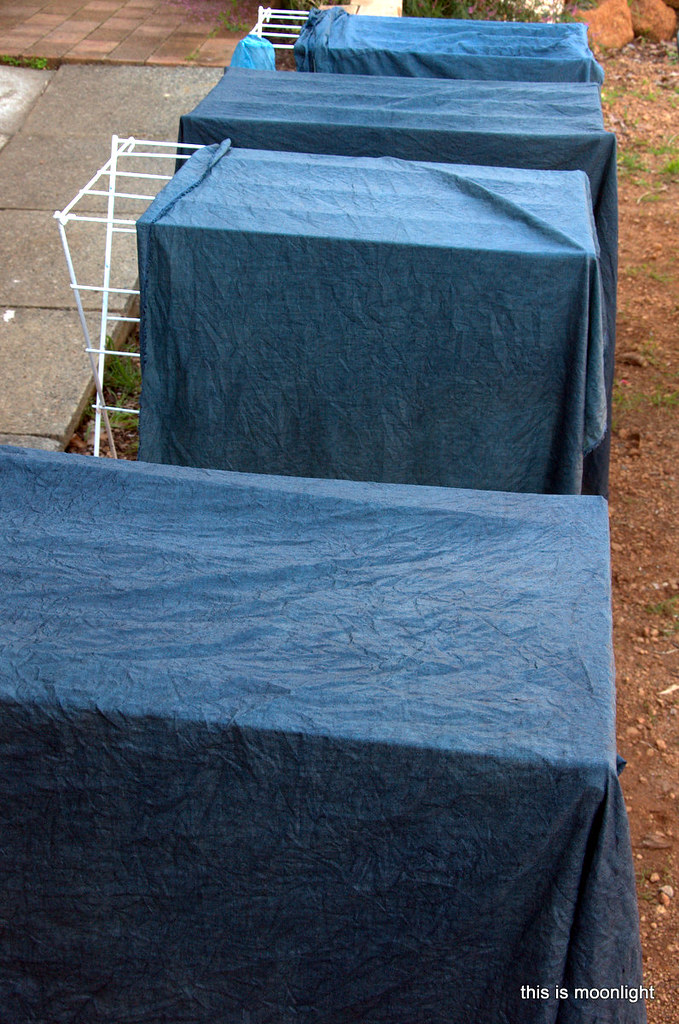 Sawa adjusted the pH of the vat and then we left it to rest for another day.  Apparently, with care, the vat will last around 3 months.

The day was rounded out by a beautiful Japanese lunch and some videos of the farm accompanied by Sawa’s guitar playing which turned out to be just what everyone needed to have a wee siesta!

When I got home I also wanted to test out some overdyeing to see if I could get different shades with dyes I can get locally.

Madder on silk, overdyed with pomegranate and then sour grass. 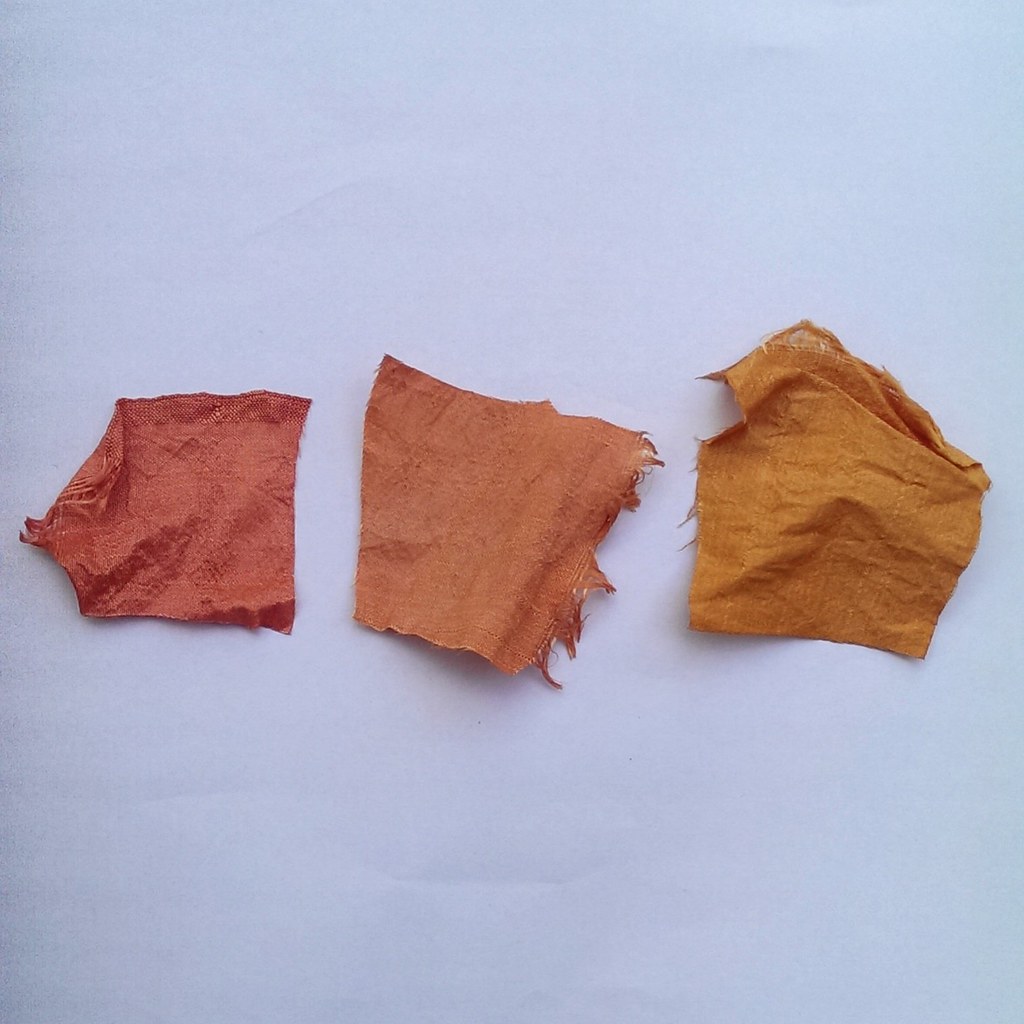 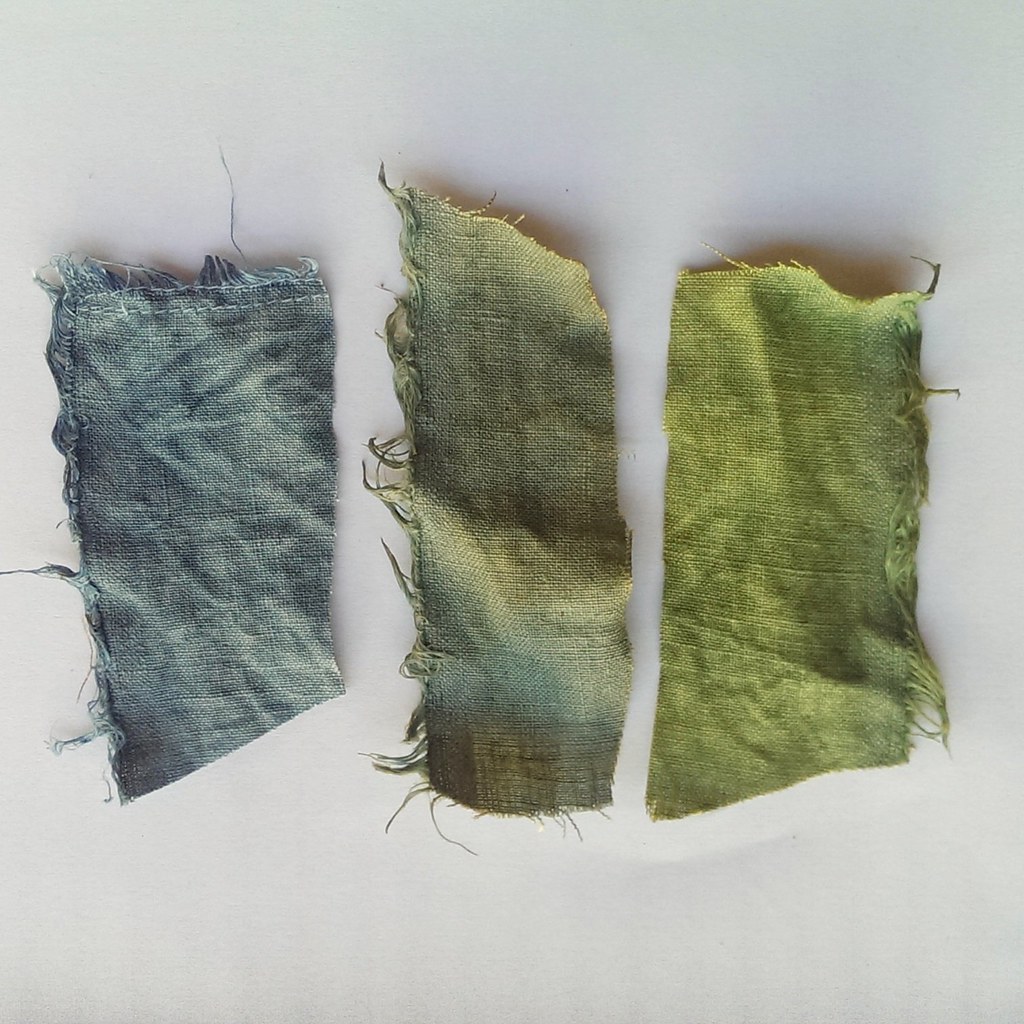 Indigo overdyed with eucalyptus trying to get a purple was not as successful but perhaps bottlebrush flowers or red ironbark would be a better option. 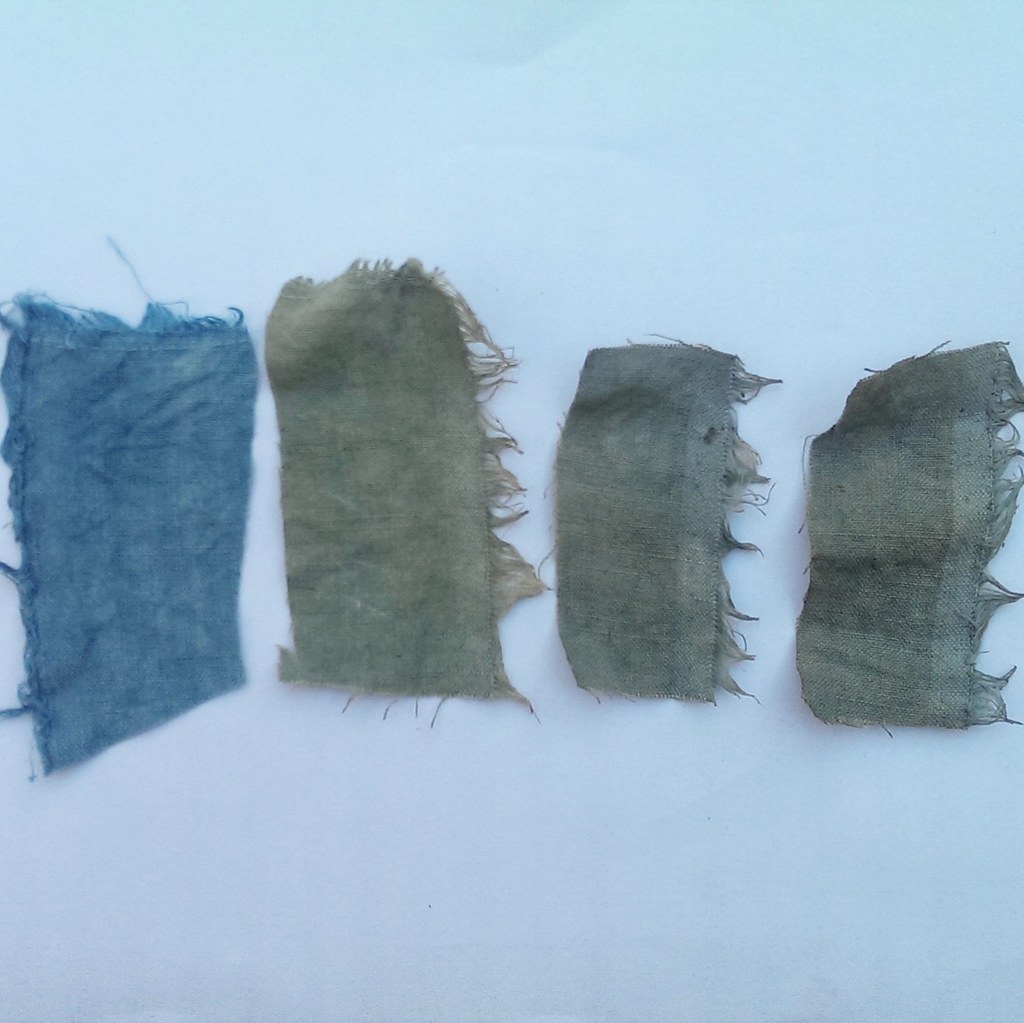 Kitta and Sawa’s story and the care they put into sharing their knowledge throughout the day just left my heart glowing.  These beautiful colours came home with me and I am currently plotting how best to honour their provenance. 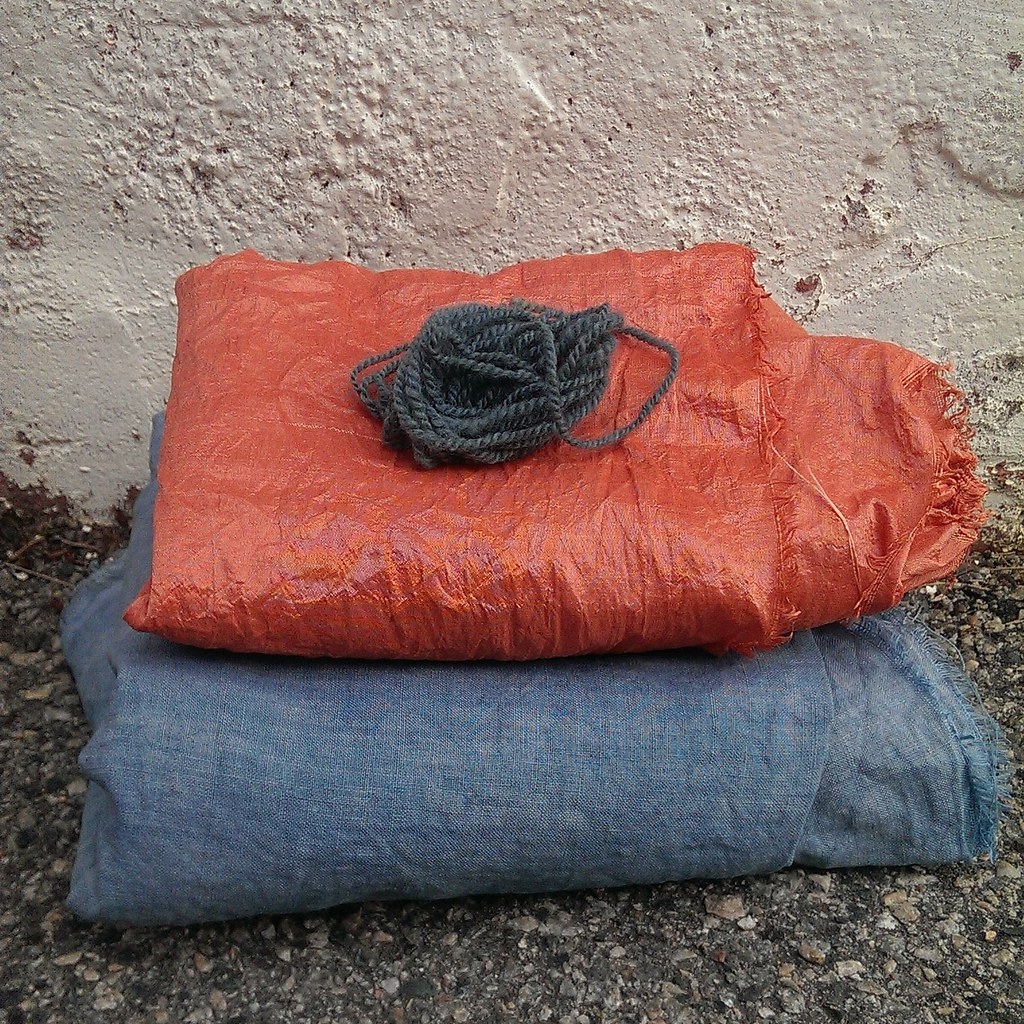 10 thoughts on “Dyeing with Indigo – The Japanese Way”

Follow this is moonlight on WordPress.com
Join 465 other followers