Last week I received the most wonderful present in the post from Poppy’s Patch Nursery, a parcel full of blue in its native natural form.

Meet indigofera australis, a native plant that produces a blue dye that is strongest when flowering.  I left my hand in this photo so you get a sense of how small the leaves are if you are looking to identify it! 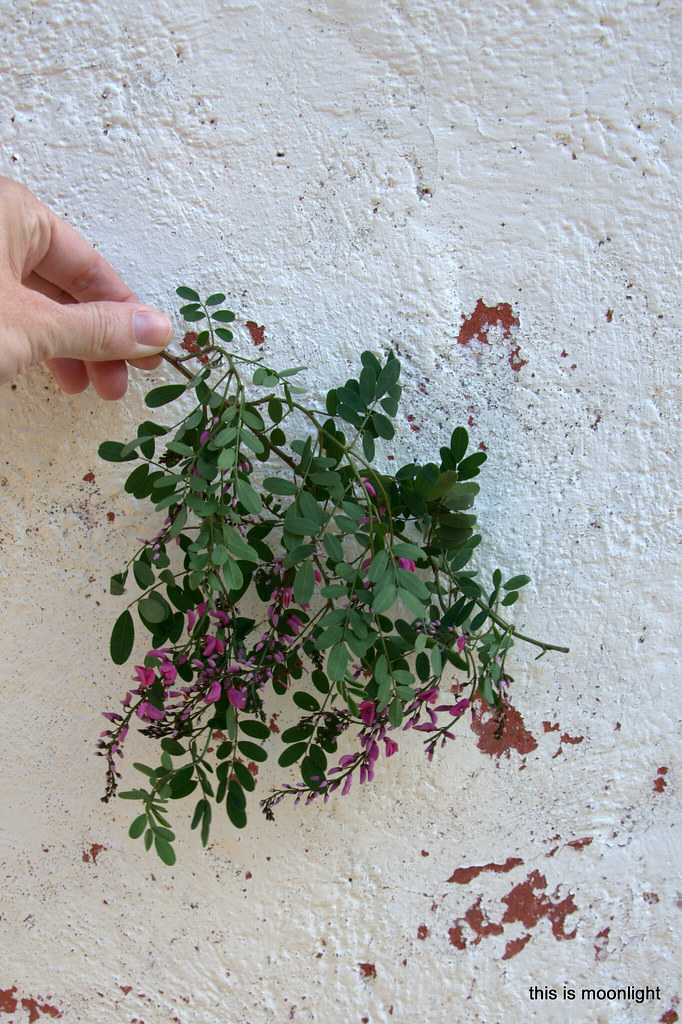 I have gone on and on about how I wanted to get some blue into my local outfit but I wasn’t really convinced it would happen so this parcel was such a happy treat. Armed with Myf’s tutorial and my freshly acquired book, The Modern Natural Dyer I set about combining the techniques to make a 100% natural and local approach.

I started by soaking the leaves (around 300g) in warm water.  At this stage I added my silk tissue for some direct dyeing and the result was a greyish blue. 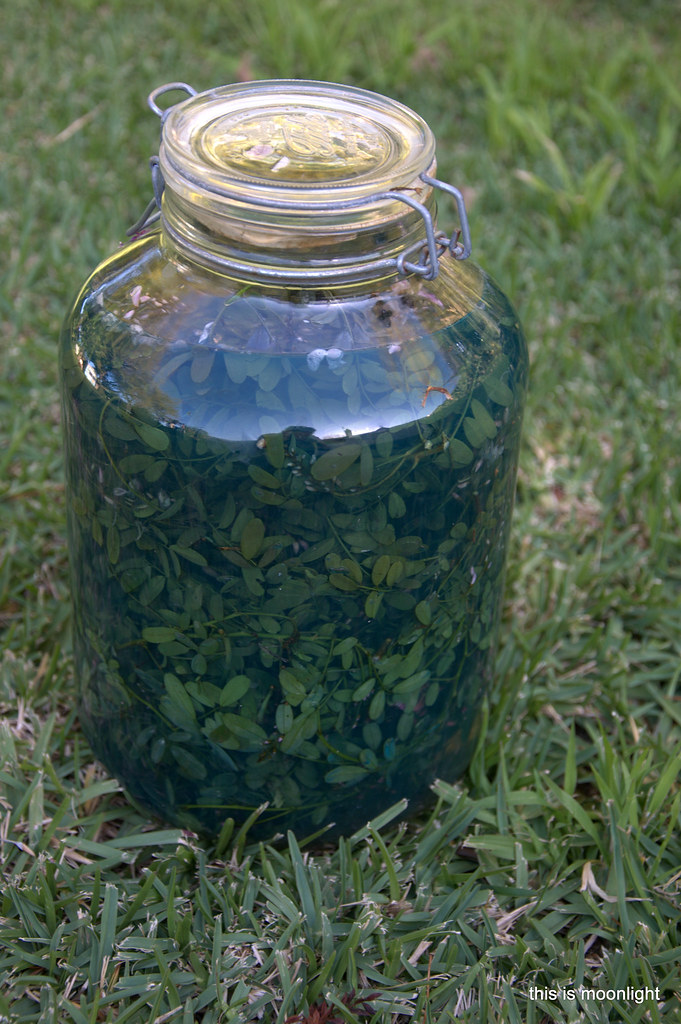 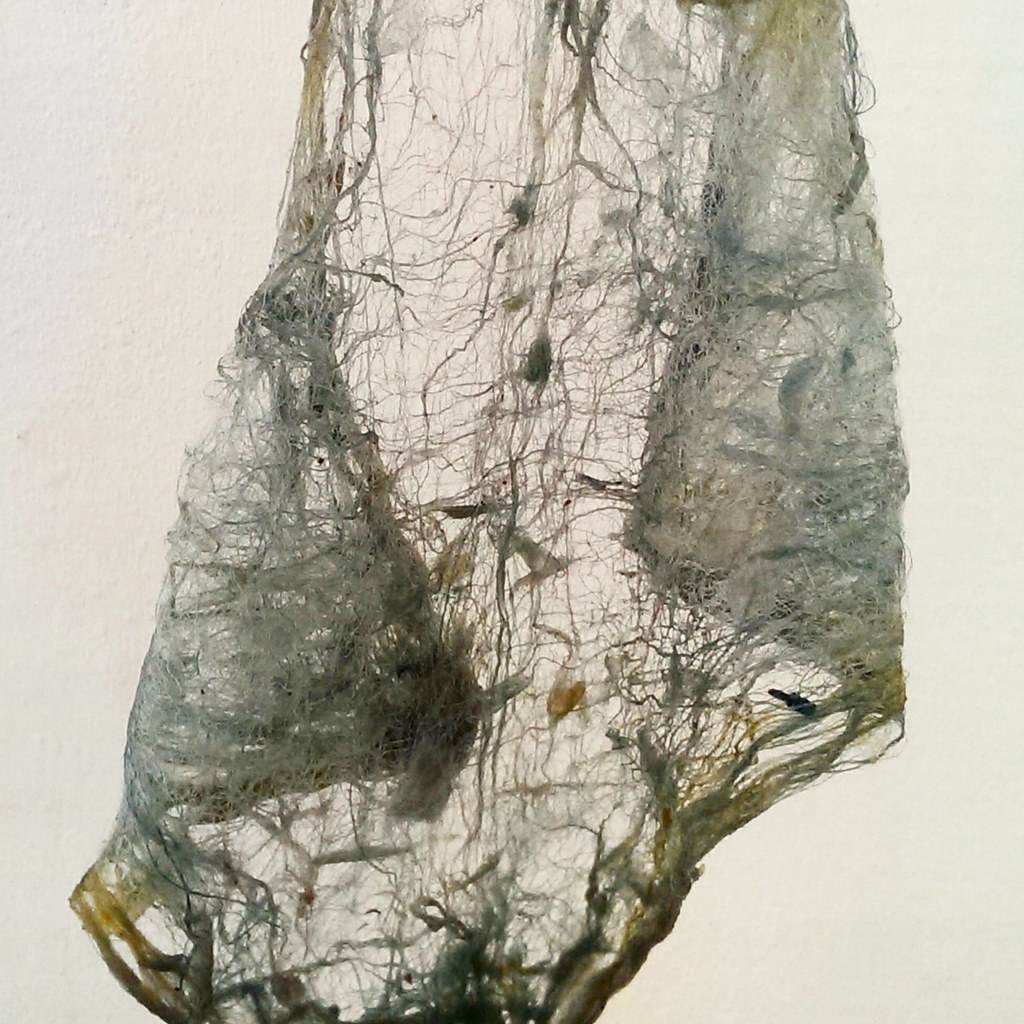 After 4 days the top jar had changed colour and a thick slick of shiny blue was layered on top.  This is a good sign that the dye is strong and ready to use. 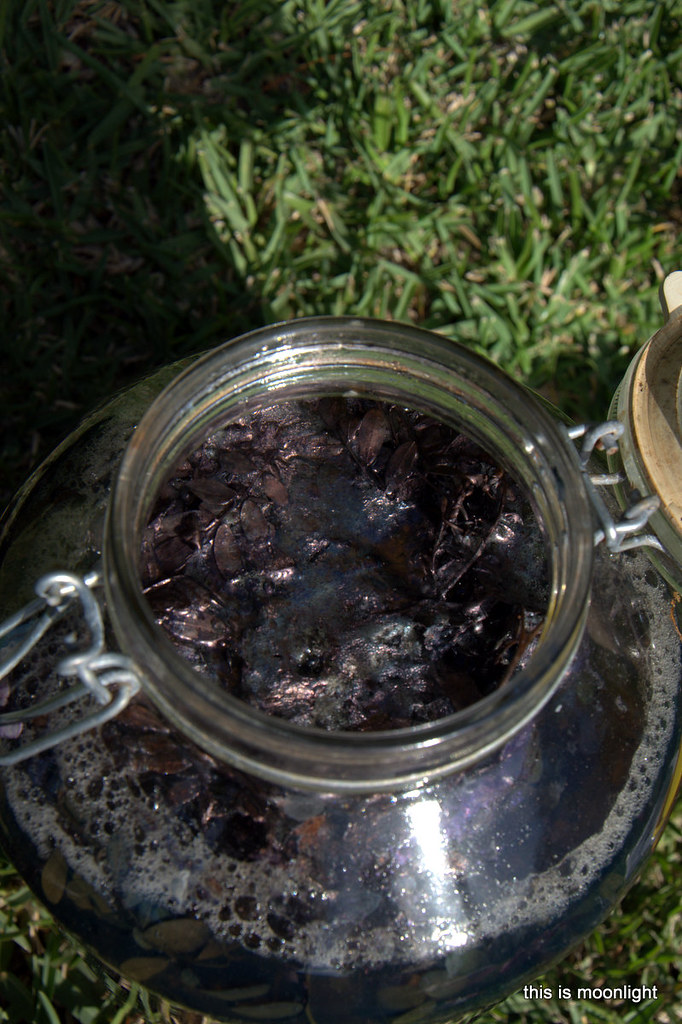 I then assembled all the bits and pieces I needed, scales, a pH meter, a thermometer and the all important Honey and lime.  Local honey was easy enough to source, this one was from a lady in my weaving group and comes from the Stirling Ranges. The lime on the other hand, was surprisingly hard to track given that we live in a giant lime sandpit.   Eventually I gave up on all the large retail sources and went small, ending up at a home brewers shop in Osborne Park.  (Dec 2015 Update – I did some tests with Trudi and we found Ca(OH)2 was the better form of lime. A friendly soil scientist then found a local source at Lime Industries, ask for lime putty or envirolime. These do not have surfactants added. I now have plenty if anyone is in need!) 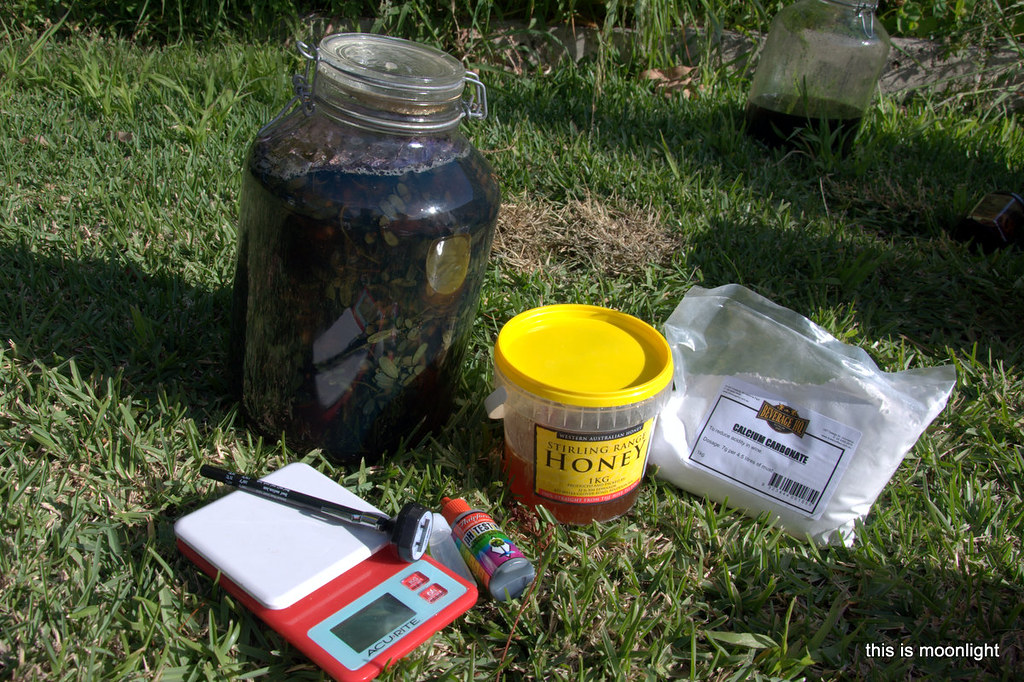 Firstly I strained the liquid into a large pot, then added a little more water to the jar to rinsed the leaves again with a small amount of water to rinse any remainder off the leaves and then added this to the pot.  I did this until the water was fairly clear.  Up until this point I have followed Myf’s approach. 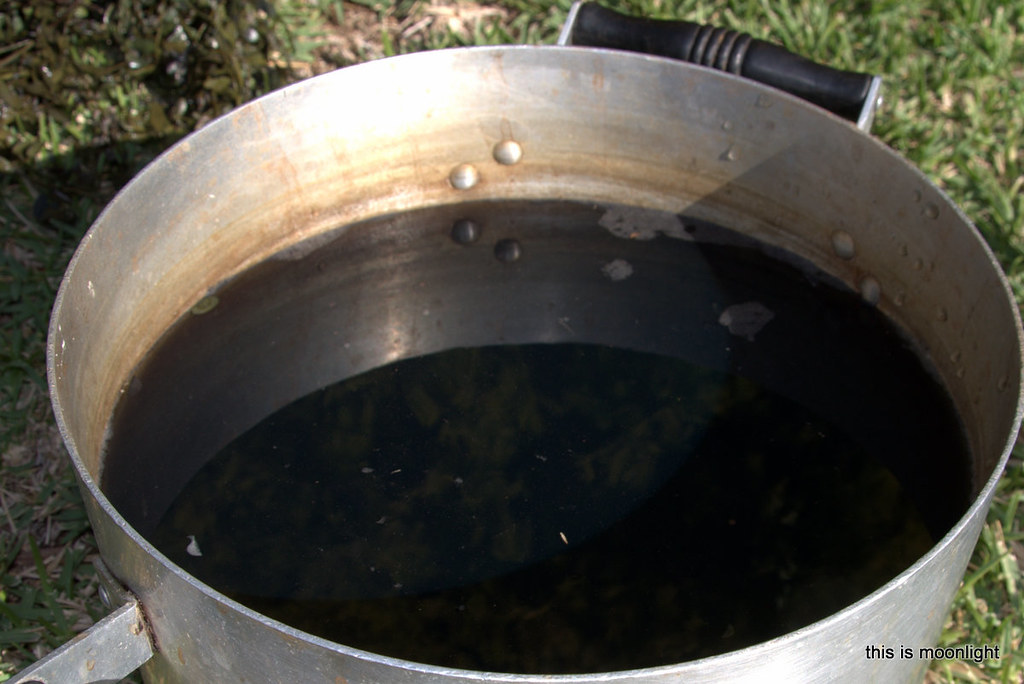 I then used the basis of the Michel Garcia 1-2-3 approach as described in the Modern Natural Dyer.  The 1-2-3 stands for 1 part dye, 2 parts base and 3 parts reducing agent.  In my case I used lime as the base and honey as the agent.

The trickiest part was that I was unsure exactly how much indigo was in my lot of freshly fermented leaves.   I measured the pH and found it was sat at around 5 so thought I would use that as an indicator. Whilst heating the pot gently to 49 degrees I added the honey and lime in increments, and eventually stopped at 60g of honey and 90g of lime when the pH was at 8 and the water was quite yellow in colour.   In hindsight I think I could have added less lime but kept adding extra as the Ph was so low.   I essentially switched around the base and agent!  I then kept the pot at this temperature for half an hour before gently adding the presoaked and scoured yarn. 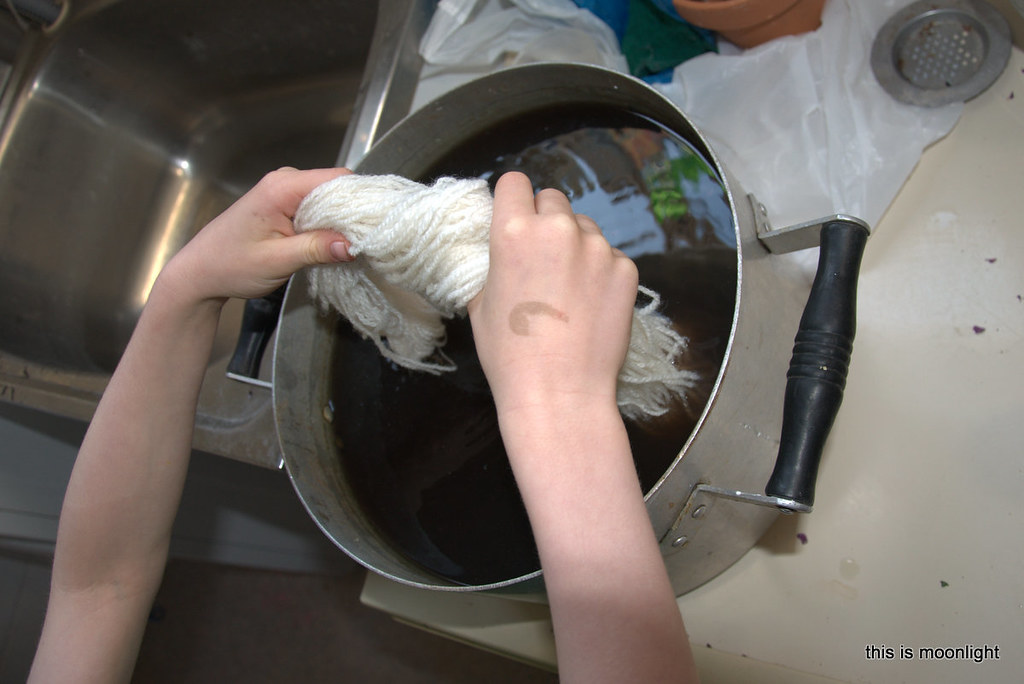 Once you add the lime and honey you need to not add oxygen to the mixture so moving gently and massaging under the water is essential.  Here is the greeny blue of the yarn (and my hands!) on extraction. 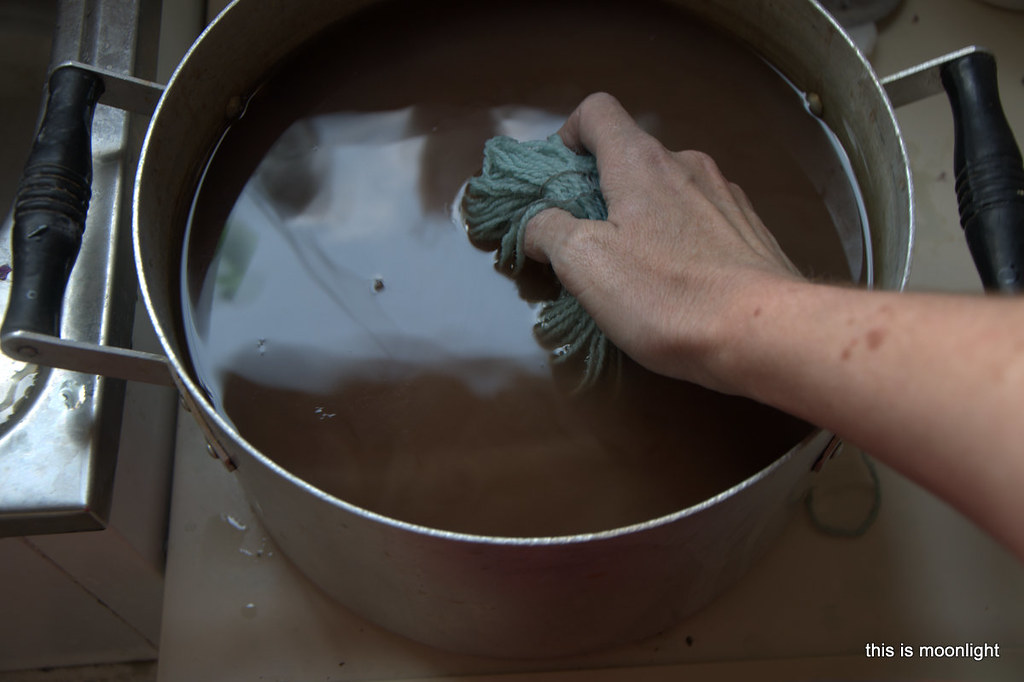 And here is the blue after a little airing, pretty isn’t it! 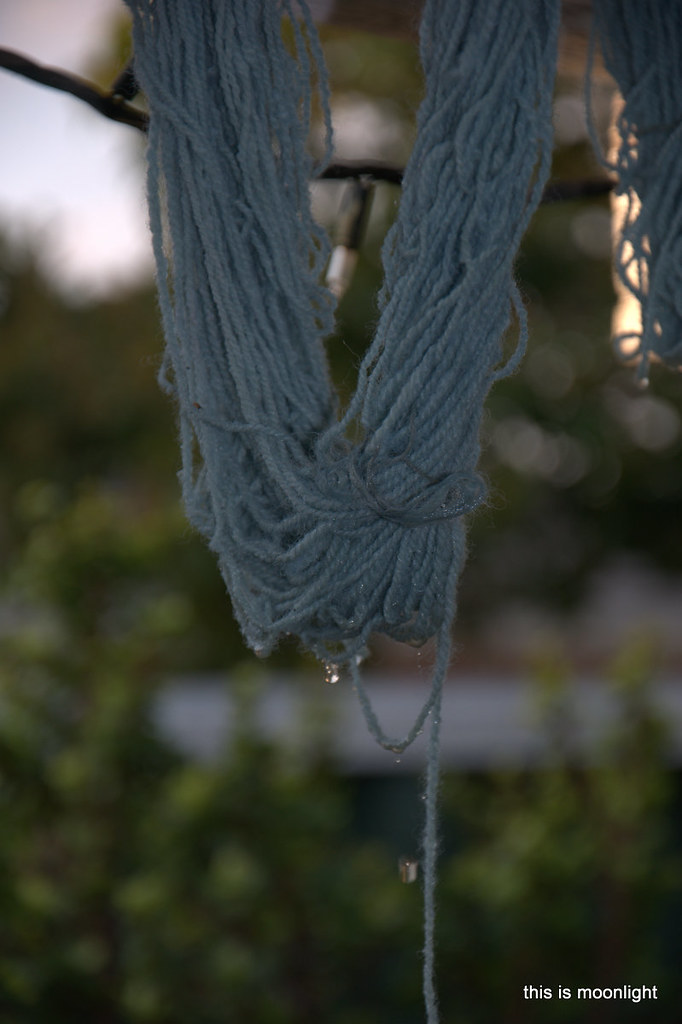 I dipped 300g of wool 3 times each before the dye was exhausted.  I kept the pot overnight and tried to see if I could recover it the next day without luck.  I need to read up on whether there is more I could do at this stage.

As you can see the colour is quite different to the ryukyu indigo but still absolutely swoon worthy!   Now you are all caught up on my progress, I am off to get serious with my loom and knitting needles…. 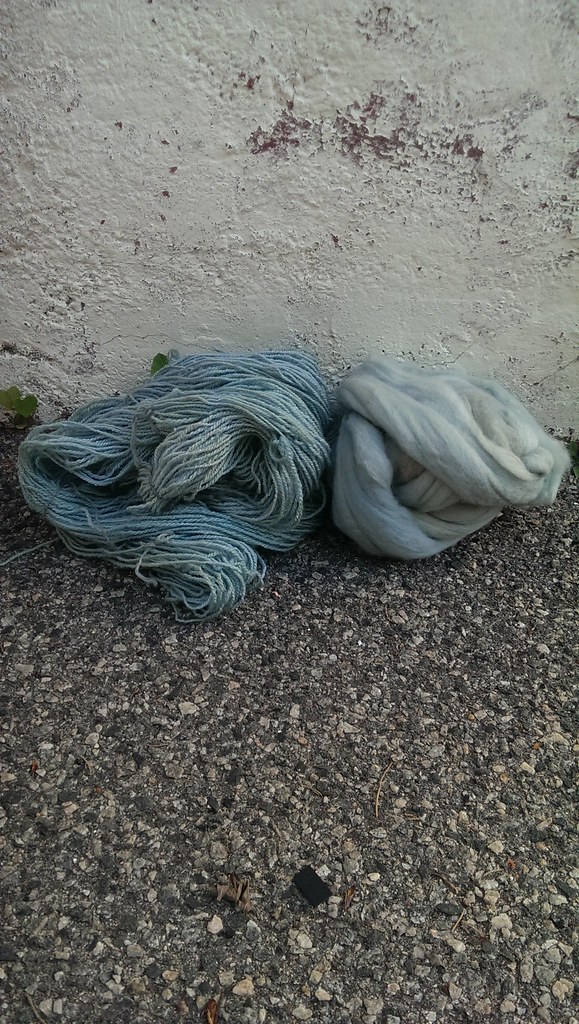 12 thoughts on “Indigo – the Australian Way”